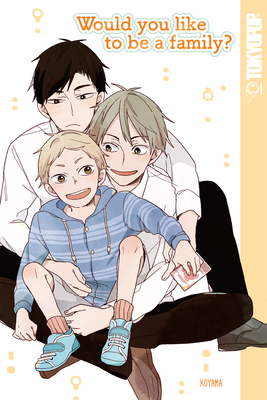 Families come in many shapes and sizes, and these three are no different!

Takemura is a loner with little interest in socializing with others. Bullied in high school for being gay, he prefers to spend time by himself so he won't get hurt again. When he runs into his bright, friendly coworker Natsui in the supermarket, he's surprised to find out that he's a single father... and even more surprised to be invited to dinner, with no room to decline!

Kuma is a good guy, but due to his constant scowl and rough appearance is often dismissed as a deadbeat. When he oversees his friend's older brother break up with his boyfriend, Yagi, Kuma becomes intrigued with this attractive stranger and slowly, his curiosity begins to blossom into a crush.

Kodama is a reserved psychology major who is approached by the loud, outgoing Harada when he falls ill on his way home. It turns out the two of them study at the same university, and Harada insists the two become friends. But as they spend more time with one another, Kodama begins to question how he truly feels.

Koyama is a Boys Love manga artist from Japan, known for Would You Like to Be a Family?, and Hoshino Doubutsuen Koimonogatari.