What to the Slave Is the Fourth of July? (Hardcover) 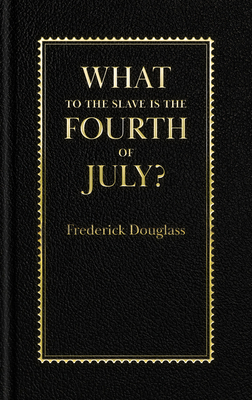 What to the Slave Is the Fourth of July? (Hardcover)

A rousing abolitionist speech with themes that still resonate today, from equality under the Constitution and God to a vision of America that defends freedom for all.

One of the most memorable speeches in American history, Frederick Douglass's "What to the Slave is the Fourth of July?" is now available in an elegant hardcover edition.

Douglass first delivered the famous speech on July 5, 1852, to the Rochester Ladies' Anti-Slavery Society. After paying respect to the patriotic architects of America's independence, Douglass exposed the hypocrisy of a nation that enshrined the inalienable rights of man yet enslaved millions. The signing of the Declaration of Independence was meaningless to slaves, Douglass argued, and the annual celebration of a freedom not afforded to them was the worst possible insult.

Throughout the speech, Douglass directly quoted passages from the Declaration of Independence, the U.S. Constitution, and the Bible to support his argument that slavery must be abolished in the United States. Douglass was especially critical of the faith leaders in America that used the church to justify slavery rather than to spearhead positive societal change.

Despite Douglass's condemnation of the institutions that protected slavery, the speech also emphasized America's young age and her potential to change for the better. In keeping with this belief in an America that would one day guarantee freedom for all, Douglass delivered "What to the Slave is the Fourth of July?" to audiences nationwide in the decade preceding the Civil War.

Famous figures such as James Earl Jones, Morgan Freeman, and Douglass's descendants have performed small sections of the hour-long speech. Abridged editions of the speech are also disseminated for educational purposes. Because "What to the Slave Is the Fourth of July?" is an incredibly nuanced speech, it is often misrepresented or shared out of context. Now you can read the speech as it was meant to be experienced, in its entirety.

Frederick Douglass's most famous speech is as relevant today as when it was first delivered in 1852. A defining document of the United States, "What to the Slave Is the Fourth of July?" is essential reading for all Americans.