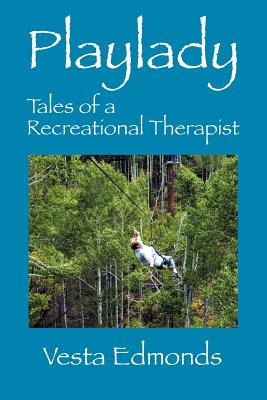 
Not On Our Shelves—Ships in 1-5 Days
(This book cannot be returned.)
The tough, know-it-all boys who have been kicked out of school, engaged in theft, and generally been incorrigible, aren't quite so macho when a leech attaches itself to their leg. They also don't really know how to paddle a canoe, but want everyone to think they do. "Wilderness therapy" works.
Joel lookslike he's very retarded. His ear is on his chin, his eyes are placed in the wrong area of his face, he has a severe cleft lip and palate. Not assuming the degree of his mental deficiencies, Playlady>/b> teaches him to throw soft balls and bean bags across the room, and laugh. Much to the dismay of the nurses.
Don, known to the nurses as the femur in 360, will have his leg in traction for 6 weeks, but it doesn't squelch his need to play. It does challenge the Playladyto find ways of providing activities that he loves.
When Little Mary came to pediatrics, Playlady had to decide whether to stay aloof, or throw herself into the team caring for a terminally ill child. It would be acceptable to "hide from the tragedies of life to avoid the pain, but then you miss the joy," You miss the dance.
When Ryan's arm was chopped off in a farm combine, his mother packed it in ice and he was helicoptered to our facility where it was reattached. Finding play for a boy with one arm totally immobilized, was just a day in the life of the Playlady.
Marcus also lost an appendage while holding his shotgun and trying to climb a fence. With his thumb gone, it was impossible to have a grip. So, they took his second toe off and sewed it where his thumb had been. It was a job for Playlady to help him use the hand naturally again. As in holding and moving game pieces.
Anorexia has vicious tentacles that take a strong hold of bright, ambitious young people who come to the point of life or death. Body perceptions are hard to dispel, and it takes an entire medical team to help them get strong enough to play, and then leave.
A deadly car wreck claims the father, sister and leaves three other family members in hospitals. Five year old Claire spends months on Peds, relearning to crawl, walk, and talk with the Playlady.
It is a total shock when the hospital eliminates the recreational therapy programs, due to budget cuts. Anger, and sadness finally give way to hope, when Playlady finds herself walking down the hall of the State Psychiatric hospital with a huge ring of keys clipped to her belt. Sometimes that's the only way to tell who stays and who goes home at night.
With a minor in Psychology going along with the BS in Recreational Therapy, it was a great opportunity to actually live, work and play with folk who exhibited all the symptoms written of in the texts. The paranoid schizophrenic, the depressed, the murderers judged insane by a jury, become daily companions. Sandy used to be a bird, and has a picture on the wall to prove it. Joe speaks in word salad, totally unintelligible. Outings can be scary, embarrassing, but are an essential part of judging a patients ability to live on the outside. Many never do.
Again, Playladyis out of a job, and again she finds a new one. Back to the same hospital where she worked on Peds, but now in the inpatient, acute, psych ward. Different keys on the belt, some of the same diagnoses.
Electro Convulsive Therapy (ECT) is back in use. Better known as shock treatment, it totally changes the life of an elderly woman who failed at suicide with a shotgun blow. By the end of her stay she was singing with Playlady at the piano.
Whatever the diagnosis, there is a need that can be fulfilled by Playlady. Finding that need, and determining how to meet it, is the most exciting part of being a recreational therapist.