God, Guns, Capitalism, and Hypermasculinity: Commentaries on the Culture of Firearms in the United States (Equity in Higher Education Theory #16) (Paperback) 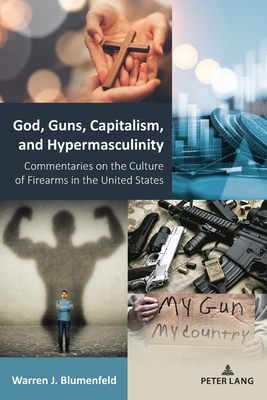 God, Guns, Capitalism, and Hypermasculinity: Commentaries on the Culture of Firearms in the United States (Equity in Higher Education Theory #16) (Paperback)

According to the U.S. Centers for Disease Control and Prevention, gun-related deaths have reached epidemic proportions in the Unites States, snuffing out the lives of well over 30,000 people (with 1/3 homicides and the remainder suicides and accidents) and wounding many more annually. Everytown organization found that on average, 96 people are killed by guns every day, and for every person killed by a gun, two more are injured. Seven children and teens are killed on average daily. Many of the guns used in these killings reach military-level weapons power, guns which currently remain legal to purchase. Today in the United States, there are approximately 120.5 firearms per 100 people. The Unites States ranks high when compared with 22 other wealthy industrialized nations in per capita gun-related deaths with 3.85 per 100,000 residents, compared, for example, with the United Kingdom at 0.07, Japan at 0.04, Germany at 0.12, Indonesia at 0.10, and Oman at 0.06.

This book covers issues of firearms violence and efforts at common sense reform from multiple perspectives, including a culture and climate of firearms addressed from a historical, social, governmental, legal, and psychological perspective; political activism and organizing strategies; and options for reform. It is written in a clear and accessible style from a progressive political perspective.

Warren J. Blumenfeld earned his doctorate degree in education at the University of Massachusetts Amherst and his master's degree in special education at Boston College. He is the author of The What, The So What, and The Now What of Social Justice Education (Peter Lang, 2019) and co-editor of Readings for Diversity and Social Justice.