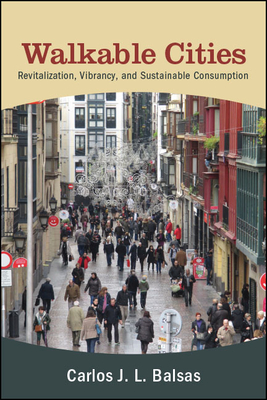 
Not On Our Shelves—Ships in 1-5 Days
(This book cannot be returned.)
Walkable precincts have become an important component of urban revitalization on both sides of the Atlantic. In Walkable Cities, Carlos J. L. Balsas examines a range of city scales and geographic settings on three continents, focusing on the Iberian Peninsula (Spain and Portugal), Latin America (Brazil and Mexico), and the United States (Phoenix and New York City). He explains how this "pedestrianization of Main Street" approach to central locations (downtowns and midtowns) has contributed to strengthening various urban functions, such as urban vitality, pedestrian and bicyclist safety, tourism, and more. However, it has also put pressure on less affluent, peripheral, and fragile areas due to higher levels of consumption and waste generation. Balsas calls attention to the need to base urban revitalization interventions on more spatially and socially just interventions coupled with sustainable consumption practices that do not necessarily entail high growth levels, but instead aim to improve the quality of city life.
Carlos J. L. Balsas is Assistant Professor of Urban Planning at the University at Albany, State University of New York.