The Politics of Right Sex (Paperback) 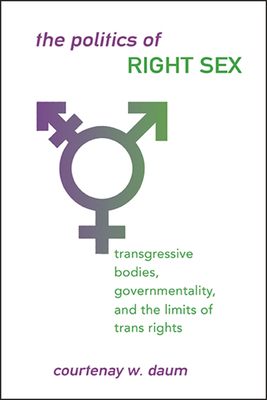 The Politics of Right Sex (Paperback)


Not On Our Shelves—Ships in 1-5 Days
(This book cannot be returned.)
While the growing attention to trans rights and the development of trans-specific interest groups suggest that the time is right for a trans rights movement akin to prior civil rights movements, The Politics of Right Sex explores the limitations of rights-based mobilization and litigation for advancing the interests of trans communities. Synthesizing critical theory, transgender studies, and extant law and society research, Courtenay W. Daum argues that trans individuals, particularly those situated at the intersection of gender, race, class, and immigration status, are regulated by myriad forces of governmentality that work to maintain the sex and gender binaries and associated power hierarchies. Because many informal practices and norms are located beyond the reach of civil rights laws, a trans politics of rights may produce some modest legal and legislative reforms but will not eliminate the disciplinary forces that work to subject trans individuals. It will also privilege those who are able to conform with dominant gender norms at the expense of the interests of those individuals who are gender nonconforming, gender queer, trans people of color, and others unable or unwilling to embrace a transnormative presentation of self and/or lifestyle. In order to disrupt the dominant discourse and hierarchical power arrangements in pursuit of collective liberation for all as opposed to rights for some, The Politics of Right Sex advocates for a more confrontational approach that directly engages and challenges the hegemonic power structures that govern and discipline trans individuals.
Courtenay W. Daum is Professor of Political Science at Colorado State University. She is the coauthor (with Leslie F. Goldstein, Judith A. Baer, and Terri Susan Fine) of The Constitutional and Legal Rights of Women, Fourth Edition and the coeditor (with Robert J. Duffy and John A. Straayer) of State of Change: Colorado Politics in the Twenty-First Century.