The Last Noble Gendarme: How the Tsar's Last Head of Security and Intelligence Tried to Avert the Russian Revolution (Paperback) 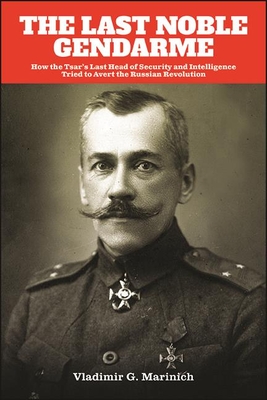 The Last Noble Gendarme: How the Tsar's Last Head of Security and Intelligence Tried to Avert the Russian Revolution (Paperback)


Not On Our Shelves—Ships in 1-5 Days
The Last Noble Gendarme is the first biography of Major General Konstantin Ivanovich Globachev and his wife, Sofia. Tsar Nicholas II's last chief of security, Globachev was an eyewitness to the seething turmoil in the capital of the Russian Empire. Beginning in 1915 he tried to avert the unrest that grew into a revolution replete with mayhem and violence by cautioning his senior government officials about the growing crisis through meetings and written reports. The incompetence and corruption of his superiors caused Globachev's warnings of an impending disaster to be often disregarded, misunderstood, and sometimes rejected flat out. The warnings of Globachev's security and intelligence agency going unheeded helped lead imperial Russia to its cataclysmic destruction--perhaps a metaphor for our times. Following the revolution, Globachev was detained by the new government, but released and forced to flee with his family after the Bolsheviks gained power. Globachev and his family survived the revolution, the subsequent civil war and exile in Turkey. The final chapter of their dramatic adventure was their immigration to the United States, where they became citizens. Now, through their complete biographies, we get to know them as individuals who lived through the most tempestuous and dangerous of times.
Vladimir G. Marinich is Professor Emeritus of History at Howard Community College in Columbia, Maryland. He is the translator of The Truth of the Russian Revolution: The Memoirs of the Tsar's Chief of Security and His Wife, by Konstantin Ivanovich Globachev and Sofia Nikolaevna Globacheva, also published by SUNY Press.