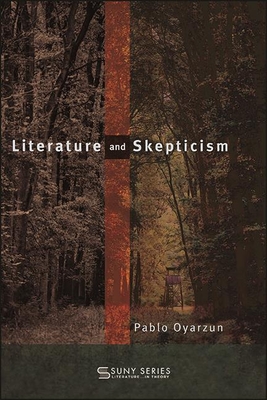 
Not On Our Shelves—Ships in 1-5 Days
(This book cannot be returned.)
Literature and Skepticism links the skeptic attitude to the conditions of possibility in (modern) literature--in particular, the narrative form and the essay. Pablo Oyarzun proposes that narrative and the essay document the relationship between literature and skepticism in different but complementary and, at the same time, complicit ways. As the narrative performance reaches the structural limit of the literary--understood as the domain of fiction--a sort of para-discursive reflection critically accompanies this performance, discussing it, ironizing it, feigning to disbelieve it, or overtly belying it. Yet the narrative doubtfully takes distance from itself, surrendering all right to a final truth at the very moment at which truth emerges, essayistic, to the surface. The authors considered--Montaigne, Swift, Lichtenberg, Kleist, Kafka, and Borges--are eminent representatives of one and the other form, and all of the works analyzed are cases of a complex interplay between narrative and essay.
Pablo Oyarzun is Professor of Philosophy at the University of Chile. He is the author of several books, including Doing Justice: Three Essays on Walter Benjamin (translated by Stephen Gingerich).