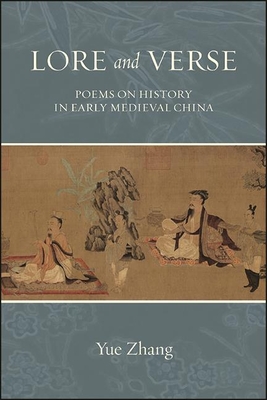 
Not On Our Shelves—Ships in 1-5 Days
(This book cannot be returned.)
Lore and Verse is the first English-language book dedicated entirely to studying poems on history (yongshi shi) in premodern China. Focusing on works by poets from the entire range of early medieval China (220-589), Yue Zhang explores how history was disseminated and interpreted through poetry, as well as how and why certain historical figures were commemorated in poetry. In writing poems on history, poets retrospectively crafted their own identities through their celebration of historical figures, and they prospectively fortified a continuous lineage for transmitting their values and reputation to future generations. This continuous tradition of cultural memory informs a poet's reception of historical figures, which in turn shapes that tradition through further intertextual connections. Lore and Verse questions the sweeping generalization of early medieval Chinese poetry as consisting mainly of exuberant images and an ornamental style-an inaccurate characterization repeated by later historians and literary critics-and it provides translations, close readings, and analyses of selected poems on history that will be useful for students, instructors, and general readers interested in premodern Chinese literature and culture.
Yue Zhang is Associate Professor of Chinese Literature at the University of Macau.