The Male Biological Clock: The Startling News about Aging, Sexuality, and Fertility in Men (Paperback) 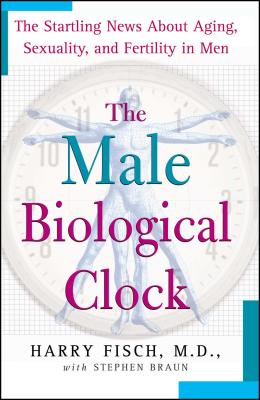 The Male Biological Clock: The Startling News about Aging, Sexuality, and Fertility in Men (Paperback)

By Harry Fisch, Stephen Braun (With)


Not On Our Shelves—Ships in 1-5 Days
Say "biological clock" and most people think "women." Yet men have biological clocks too, reveals Dr. Harry Fisch, one of the country's leading experts in male infertility and author of this groundbreaking new book, The Male Biological Clock. Men's clocks tick at a different rate from women's and of course cause an entirely different set of bodily and behavioral changes over the course of a lifetime. But while men's clocks don't strike a "midnight" toll heralding an end to fertility the way menopause does for women, male fertility, testosterone levels, and sexuality all do decline with age. Dr. Fisch's book emphasizes that even young men can have testosterone levels as low as those of much older men, leading to infertility, sexual problems, and other serious health issues. Another startling revelation is that men over thirty-five are twice as likely to be infertile as men younger than twenty-five. In addition, as men age, the quality of their sperm declines significantly, giving rise to an increased chance of a Down syndrome baby, other genetic abnormalities, and miscarriage. Every couple should know all the risks and issues facing men, because these affect two of the most important things in their life: their ability to have children and their capacity to have good sex. The Male Biological Clock is must reading for every man and every couple who is struggling to have children or improve their sex life. Many of Dr. Harry Fisch's findings are startling -- beginning with the fact that infertility is not mostly a women's problem -- and he offers many helpful suggestions for how to deal with declining testosterone, changing sexual needs, and the fertility industry. We have all heard stories of men becoming fathers in their seventies or even eighties, yet most of us are unaware that these are dangerously deceptive exceptions. Older men face a number of increased risks as fathers, and often find their sex lives and well-being changing considerably. The good news: Much can be done to slow down and even reverse the effects of a man's biological clock. The Male Biological Clock tells you what you need to know and how you can achieve optimal fertility and sexuality.
Harry Fisch, M.D., is one of the nation's leaders in the diagnosis and treatment of male infertility. He is director of the Male Reproductive Center and directs urologic microsurgery in the Department of Urology at Columbia University Medical Center of New York Presbyterian Hospital in New York City. He is also professor of clinical urology at Columbia University, where he was recently named Teacher of the Year in his department. For over fifteen years, Dr. Fisch has focused his research, practice, and surgery on male infertility and reproduction. In his private practice in Manhattan, Dr. Fisch has successfully treated thousands of men with sexuality and fertility problems. His work has been frequently cited in a variety of publications, including The New York Times and The Economist, and he has appeared on television's Today and CBS Evening News, among many others. He lives in Scarsdale, New Yor