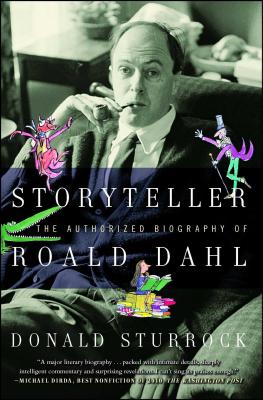 
Not On Our Shelves—Ships in 1-5 Days
Now in paperback—Donald Sturrock’s Storyteller is “a major literary biography…packed with intimate details, sharply intelligent commentary, and surprising revelations” (The Washington Post) of one of the greatest writers in the twentieth century, whose work still delights millions around the world today.

A single-minded adventurer and an eternal child who gave us the iconic Willy Wonka and Matilda Wormwood, Roald Dahl lived a life filled with incident, drama and adventure: from his harrowing experiences as an RAF fighter pilot and his work in British intelligence, to his many romances and turbulent marriage to the actress Patricia Neal, to the mental anguish caused by the death of his young daughter Olivia. In Storyteller, the first authorized biography of Dahl, Donald Sturrock—granted unprecedented access to the Dahl estate’s archives—draws on personal correspondence, journals and interviews with family members and famous friends to deliver a masterful, witty and incisive look at one of the greatest authors and eccentric characters of the modern age, whose work still delights millions around the world today.
Donald Sturrock was born in 1961 and grew up in England and South America. After reading Modern History at Oxford University, he joined BBC Television's Music and Arts Department, where he worked as both producer and director between 1983 and 1992. After leaving the BBC, he wrote and directed The Graham Greene Trilogy for BBC2's ARENA series. Sturrock also directed a four-part series for the BBC, Plácido Domingo's Tales at the Opera and two award-winning television series for IMG Artists and Idéale Audience, The Art of Singing and the Grammy award nominated The Art of Piano, as well as, An Awfully Big Adventure and The Human Face (with John Cleese). In collaboration with an international team of composers, Sturrock has adapted and directed a series of musical versions of Roald Dahl's children's stories.
“A major literary biography…packed with intimate details, sharply intelligent commentary and surprising revelations. I can't sing its praises enough.” —Michael Dirda, Best Nonfiction of 2010, The Washington Post

“A sprawling entertainment packed with anecdote and incident . . . an engaging tale with satisfying episodes of glamour, intrigue, failure and renewal.” —William Georgiades, The Wall Street Journal

“Sturrock captures the spirit of the man, his need to charm and entertain as well as his 'almost adolescent desire to annoy'.” —Barbara Fisher, The Boston Globe