Alien Flatwoods Monster: An Eyewitness Account: When The Singularity of intelligent machines meets the evolution of extrasolar biology (Paperback) 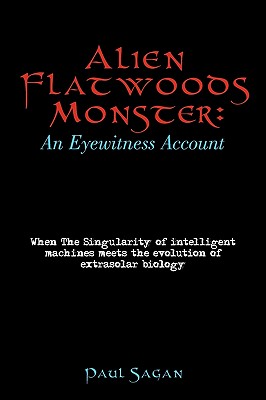 Alien Flatwoods Monster: An Eyewitness Account: When The Singularity of intelligent machines meets the evolution of extrasolar biology (Paperback)


Not On Our Shelves—Ships in 1-5 Days
(This book cannot be returned.)
An alien monster landed on a hill in Flatwoods, West Virginia, on the evening of September 12, 1952. A top news story, this horrifying encounter terrified the nation. A witness of the Flatwoods Monster, Paul Sagan, later returned to investigate. I was there.

Atop a small hill in back of Kathy May's house, seven witnesses met this floating 12-foot-tall machine monster spraying poison gas. Paul Sagan and his family were trapped for half an hour in a nearby stalled car.

In April of 1974, Sagan returned to Flatwoods to interview and tape Kathy May, Colonel Dale Leavitt and others. In this book, he lets these witnesses tell their terrifying story.

Sagan also examines extrasolar planets and explores possible alien biologies and anatomies, economies and civilizations-and how aliens could alter our religions-and how a single Galactic civilization of Alien Intelligent Machines could colonize our entire Galaxy in short time. Such stealthy Intelligent Machines would orbit and mine the comet and asteroid belts, using metamaterial Negative-Index-of-Refraction cloaking and optical-morphing to hide their existence. Sagan investigates our future Intelligent Machines and the coming Singularity-predicted by Bill Gates and Ray Kurzweil.

When will First Contact occur? Once we discover their propulsion system, it will be shortly after that.