In Its Right Time: A Story of Destined Love (Paperback) 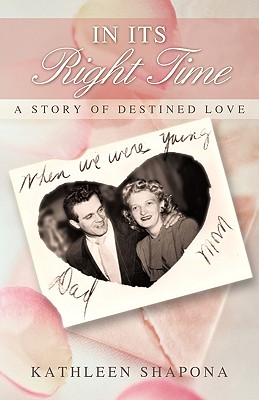 In Its Right Time: A Story of Destined Love (Paperback)


Not On Our Shelves—Ships in 1-5 Days
(This book cannot be returned.)
Roxanne Gavric's parents both passed away on the same day, five years apart, January 23rd, within the same hour. Her father, Jake died first and her mother Janelle died five years later to the day within the same hour. Roxanne, their youngest daughter, believes that her mother held on for that exact date so that a portal would open and her father could come back for his one true love.

While closing the home where she and her two sisters grew up, Roxy comes across the letters her father wrote to her mother when they were young adults, newly married and temporarily living apart. Reading these letters and having lost faith in love, Roxanne yearns to know more about her parents' younger years.

She travels back to her parents' hometown of Sharon, Pennsylvania, on the anniversary of their death. Minutes outside of the city, a car accident occurs leaving her unconscious. She awakens in Sharon hospital and soon realizes, somehow she has made her way to the year 1946. Once there, she meets her parents as young adults and begins a journey that will lead her to her true destiny.

Kathleen Shapona, a native San Franciscan, was inspired to write In It's Right Time: A Destiny to True Love from characters and events in her life, such as the passing of her parents on the same date, years apart, within the same hour. She owns a small business and continues to write in her free time.