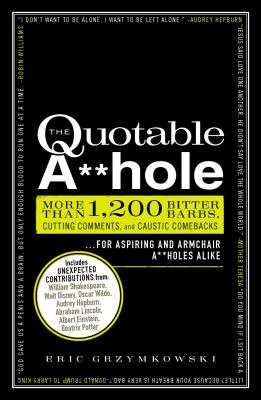 
Not On Our Shelves—Ships in 1-5 Days
Whoever said, "sticks and stones may break your bones, but words will never hurt you" never met an a**hole. Here, you'll find more than 1,200 of the most biting quotes, comments, and comebacks ever uttered, including:

So embrace your dark side and get ready to enjoy every over-confident, over-blown, over-the-top a**hole comment you'll ever need.
Eric Grzymkowski was born in 1984 in Fair Lawn, NJ. He spent his formative years mastering the Nintendo Entertainment System, before discovering the Internet in 1995. Since then, he has devoted most of his free time to expanding his knowledge of all things useless and obscure.