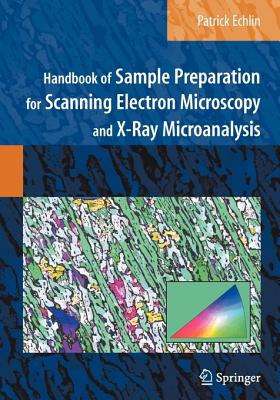 
Special Order—Subject to Availability
Scanning electr on microscopy (SEM) and x-ray microanalysis can produce magnified images and in situ chemical information from virtually any type of specimen. The two instruments generally operate in a high vacuum and a very dry environment in order to produce the high energy beam of electrons needed for imaging and analysis. With a few notable exceptions, most specimens destined for study in the SEM are poor conductors and composed of beam sensitive light elements containing variable amounts of water. In the SEM, the imaging system depends on the specimen being sufficiently electrically conductive to ensure that the bulk of the incoming electrons go to ground. The formation of the image depends on collecting the different signals that are scattered as a consequence of the high energy beam interacting with the sample. Backscattered electrons and secondary electrons are generated within the primary beam-sample interactive volume and are the two principal signals used to form images. The backscattered electron coefficient ( ? ) increases with increasing atomic number of the specimen, whereas the secondary electron coefficient ( ? ) is relatively insensitive to atomic number. This fundamental diff- ence in the two signals can have an important effect on the way samples may need to be prepared. The analytical system depends on collecting the x-ray photons that are generated within the sample as a consequence of interaction with the same high energy beam of primary electrons used to produce images.
Patrick Echlin was a lecturer in the Department of Plant Sciences and Director of the Multi-Imaging Centre, School of Biological Science, University of Cambridge until he retired in 1999. He has taught for more than thirty years at the Lehigh University Microscopy School and is the author and co-auther of eight books on scanning electron microscopy and x-ray microanalysis. He is an Honorary Fellow of the Royal Microscopical Society and received the Distinguished Scientist Award in Biological Sciences from the Microscope Society of America in 2001.