Freedom in the World 2010: The Annual Survey of Political Rights and Civil Liberties (Paperback) 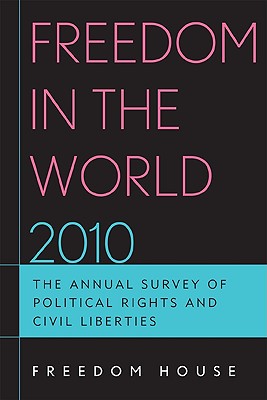 Freedom in the World 2010: The Annual Survey of Political Rights and Civil Liberties (Paperback)


Not On Our Shelves—Ships in 1-5 Days
Freedom in the World, the Freedom House flagship survey whose findings have been published annually since 1972, is the standard-setting comparative assessment of global political rights and civil liberties. The survey ratings and narrative reports on 193 countries and a group of select territories are used by policy makers, the media, international corporations, and civic activists and human rights defenders to monitor trends in democracy and track improvements and setbacks in freedom worldwide. Press accounts of the survey findings appear in hundreds of influential newspapers in the United States and abroad and form the basis of numerous radio and television reports. The Freedom in the World political rights and civil liberties ratings are determined through a multi-layered process of research and evaluation by a team of regional analysts and eminent scholars. The analysts used a broad range of sources of information, including foreign and domestic news reports, academic studies, nongovernmental organizations, think tanks, individual professional contacts, and visits to the region, in conducting their research. The methodology of the survey is derived in large measure from the Universal Declaration of Human Rights, and these standards are applied to all countries and territories, irrespective of geographical location, ethnic or religious composition, or level of economic development.
Freedom House is a nonprofit, nonpartisan organization that supports democratic change, monitors freedom, and advocates for democracy and human rights.