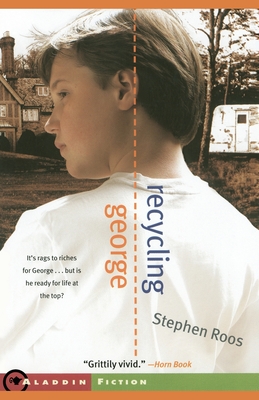 
Not On Our Shelves—Ships in 1-5 Days
Lots of kids think of running away from home. But what's a kid to do when his home runs away from him?

That's what happens to twelve-year-old George Honiker when his sister and brother-in-law move out of the Versailles Trailer Park while George is at school. Is it the end of George's world? Well, hardly! For the quick-witted, resourceful, and upwardly mobile George, it's the chance of a lifetime.

Faster than you can say "Lifestyles of the Rich and Famous," George bunks in with his classmate Rennie Whitfield. Rennie just happens to be the richest kid in town. A motorboat for his birthday. Thoroughbred horses. A butler. Really nice clothes. It's life at the top for George, and he's more than ready to have it all...until he finds that the Whitfields have some very big plans for him, too!

Populated with a host of giddy, offbeat characters, Recycling George is a funny, exuberant story that also packs an emotional wallop.
Stephen Roos's most recent novel is The Gypsies Never Came, which School Library Journal, in a starred review, said "deserves a wide and eager audience." Mr. Roos is the author of nearly two dozen books for young people, including Twelve-Year-Old Vows Revenge, Confessions of a Wayward Preppie, and You'll Miss Me When I'm Gone.

Of Recycling George, he writes: "Life for my mom and dad was a movable feast. From fifth grade to high school I went to nine different schools, so I know about George's sense of rootlessness, his yearning for a place to call home. George, I think, makes the best of it. Definitely, he's got a lot of guts. He may not be a standard-issue, board-certified role model, but when I grow up, I'd like to be him."