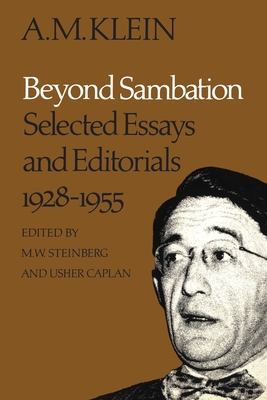 The broad range of A.M. Klein's interests, ideas, and activities is reflected in this selection of articles, editorials, and reviews - a selection that also displays the qualities that distinguished all his creative writing and the highly idiosyncratic nature of his style.

The writings in this volume span a most critical juncture in human affairs; a period that witnessed the Great Depression, the rise of fascism, Nazism, and communism, the Second World War, and the emergence of the State of Israel. As a journalist, Klein did more than record the events - he gave expression to the feelings of his people and helped shape their responses. His wide reading, sensitivity, and intelligence made him a perceptive observer and keen analyst, while his command of language, his passion, rhetoric, and wit, made him an eloquent spokesman. These qualities enabled him to carry out the responsibilities, as he saw them, of chronicler and champion.

Though Klein's major concern was with the Canadian Jewish scene, his interests were part of the mosaic of Canadian history and his work forms a chronicle and a commentary on events of world-wide significance.

Klein's journalism relates frequently, in both substance and language, to his poems and fiction, and thus provides a context for the study of his creative writing. It also reveals aspects of his personality, values, and commitments, contributing to our understanding and appreciation of one of Canada's foremost writers.