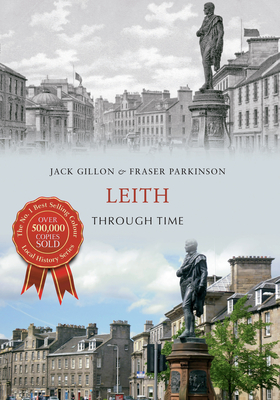 
Special Order—Subject to Availability
In 1560, when Mary of Guise ran Scotland and Mary, Queen of Scots, remained in France, Mary of Guise moved the Scottish Court to Leith, a site that is now Parliament Street, off Coalhill. Serving Edinburgh’s shipbuilding and repair facilities, Leith’s port saw the opening of a new Wet Dock, the first of its kind in Scotland. Today, Leith is, again, part of Edinburgh, and recent regeneration has helped improve its poorer areas.Leith has played a long and prominent role in Scottish history. As the major port serving Edinburgh, it has been the stage on which many significant events in Scottish history have taken place. From housing the Scottish Court to seeing civil war, being the port of call for royal arrivals and becoming its own burgh, Leith has seen it all. Leith Through Time takes you on this journey, with old and new images to illustrate how Leith has changed over the years.
Jack Gillon is a long term resident of Edinburgh and has worked as a Town Planner involved in the conservation of the city’s heritage of historic buildings for around thirty years and has an extensive knowledge of the city's history and architecture. He writes extensively on the historical heritage of Scotland and has had several books published by Amberley.Fraser Parkinson is a local author who runs the hugely popular 'Spirit of Leithers' page on Facebook which traces the social and architectural history of Leith through old images.