Wearing the Trousers: Fashion, Freedom and the Rise of the Modern Woman (Paperback) 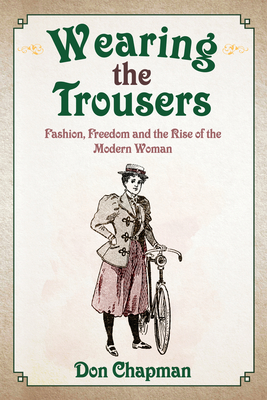 Wearing the Trousers: Fashion, Freedom and the Rise of the Modern Woman (Paperback)


Special Order—Subject to Availability
In the 1850s a craze swept through the wardrobes of the women of British and American society. These 'bloomers', wearing their new loose-fitting 'Turkish dress', represented a turn against the painful and unhealthy fashions of the Victorian hey-day with its corsets and bindings. But it was more than that: with the newspapers everywhere decrying this new style of dress, bloomers became an overnight feminist firestorm. These early pioneers had set in motion a form of social protest in which everyday dress – in public and in the home – became a political act.Don Chapman traces the development of this new movement through the changing fashions. With every new style of dress, there came predictable outcries of disapproval and satire from the world's press. Slowly, inch by inch and stitch by stitch, the women made progress. At the turn of the century, campaigners such as Lady Harberton championed the new 'Rational Dress Movement', adroitly rebranding the movement as a rational cause – the buzzword of the day for all right-thinking individuals – and thereby giving the case for the divided skirt a new scientific justification. Her movement would scandalize and inspire many, from H. G. Wells to George Bernard Shaw. Merging with the early Suffragist cause in 1907, the story of women's fashion takes in issues as various as the working conditions of garment makers, female prostitution and the nineteenth-century slave trade. Wearing the Trousers charts the progression from the corseted lady at a remove from the Establishment to the liberated woman at work in a modern, more inclusive society.
Don Chapman trained as a journalist and worked for thirty-five years as the theatre critic at the 'Oxford Mail', in addition to acting as the paper's columnist. Whilst working as its arts editor, he embarked upon reconstructing the archives for the Oxford Playhouse, which became his first full-length book, 'Oxford Playhouse: High and Low Drama in a University City' ("A well-documented account", TLS). A graduate of the university, Don has had a long-standing interest in the women's dress movement ever since encountering stories of the Rational Dress Club in the newspaper archives.