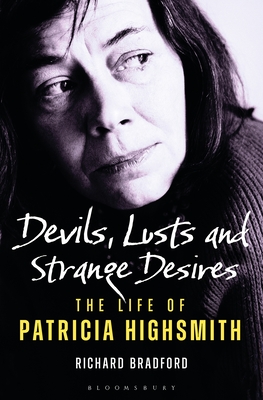 'My New Year's Eve Toast: to all the devils, lusts, passions, greeds, envies, loves, hates, strange desires, enemies ghostly and real, the army of memories, with which I do battle - may they never give me peace'
PATRICIA HIGHSMITH (New Year's Eve, 1947)


Made famous by the great success of her psychological thrillers, The Talented Mr Ripley and Strangers on a Train, Patricia Highsmith is lauded as one of the most influential and celebrated modern writers. However, there has never been a clear picture of the woman behind the books.


The relationship between Highsmith's lesbianism, her fraught personality – by parts self-destructive and malicious – and her fiction, has been largely avoided by biographers. She was openly homosexual and wrote the seminal lesbian love story, Carol. In modern times, she would be venerated as a radical exponent of the LGBT community. However, her status as an LGBT icon is undermined by the fact that she was excessively cruel and exploitative of her friends and lovers.


In this new biography, Richard Bradford brings his sharp, incisive style to one of the great and most controversial writers of the twentieth century. He considers Highsmith's bestsellers in the context of her troubled personal life; her alcoholism, licentious sex life, racism, anti-Semitism, misogyny and abundant self-loathing.

Richard Bradford is Research Professor in English at Ulster University, Northern Ireland and Visiting Professor at the University of Avignon, France.

"Devils, Lusts and Strange Desires is certainly an engrossing book." - The New Criterion

"Devils, Lusts and Strange Desires is certainly an engrossing book." - The New Criterion

"What makes the present biography poignant, is that there’s no redemption for a life of restlessness, despair, and torturous, doomed affairs." - Los Angeles Review of Books

"Bradford illuminates Highsmith’s talents and pitfalls by connecting them to her work. Bradford skillfully argues that Highsmith’s novels, even the ones not as well known, offer clues to the author’s personality. For those familiar with Highsmith’s novels, Devils, Lusts, and Strange Desires should deepen their understanding, while hopefully encouraging those just encountering her work to read further." - Lambda Literary

"Bradford writes in this engrossing biography, “an incomparable individual,” for she was—among other things—an alcoholic and an equal-opportunity hater (…) he gives careful attention to her individual books, praising some, criticizing others (“ponderous and fatiguing”). Though it breaks little new ground, the book is a happy mixture of biography and criticism. Near its end, Bradford, in judgment, refers to Highsmith's "execrable true self.” Readers will find it hard to disagree." - Booklist

"In this provocative account, Bradford … shows the symmetries between the life and art of Patricia Highsmith … fans of Highsmith’s work are sure to gain a deeper appreciation for the exceptional writer and her complicated life." - Publishers Weekly

"Serial biographer Richard Bradford has written a captivating biography that carves out its own space... Bradford entertainingly deduces aspects of her literary characters from Highsmith’s own experiences… His lucidity is evident, his research thorough and his writing always immensely readable. Anyone interested in Highsmith would enjoy this book..." - The Sydney Morning Herald

"This book is as snappy as an alligator … those who wish to see Patricia Highsmith devoured will no doubt applaud it." - Mail on Sunday

"Bradford’s comprehensive investigations into the devils, lusts and strange desires in the works and life of Patricia Highsmith inspire further reading of her masterpieces." - Out in Perth

"In this centenary year of her birth, her satisfyingly ruthless biographer Richard Bradford sets out the essence of her character and lifestyle in four-and-a-half withering introductory pages, to whet (or perhaps stifle) our appetites." - Daily Mail

"Tom Ripley, described by Richard Bradford as 'one of the most fascinating exercises in autobiographical fiction ever produced', is a fraudster, psychopath and murderer who remains remote from the suffering he causes and gets no evident pleasure from his achievements. The Ripliad, as the series is known, makes bleak and compulsive reading, and so too does Bradford's biography... Bradford is less concerned with making sense of Highsmith than with making sense of her novels, and in this he succeeds handsomely." - Oldie

"The outrageous stories Professor Bradford chooses to tell about her have all been told before, by her previous biographers, but are well worth hearing again, like a much-loved album of greatest hits." - The Mail on Sunday

"There have already been two significant biographies of Highsmith - Andrew Wilson's Beautiful Shadow (2003) and Joan Schenkar's The Talented Miss Ripley (2009). Bradford thus covers a lot of already familiar ground but benefits from producing a book in the centenary of Highsmith's birth as well as a more concise biography." - The Canberra Times