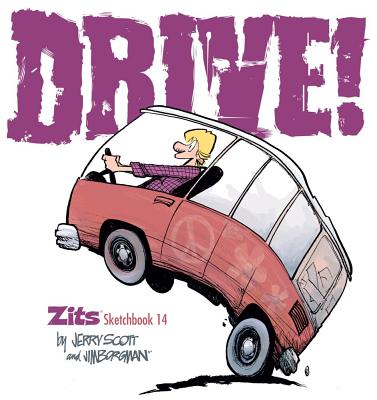 This is book number 26 in the Zits series.

From hormones to how-come-I’m-not-like-everyone-else questions and insecurities, Borgman and Scott continue to successfully tell teenage horror stories since the strips debut in newspapers in 1997. Readers and fans can find Zits in 1,600 newspapers worldwide, an achievement only 18 comic strips have ever earned.

Lauded by the Los Angeles Times "as one of the freshest and most imaginative strips," and designated as Best Newspaper Comic Strip three times by the National Cartoonists Society, Jerry Scott and Jim Borgman's Zits chronicles many of the scenes that play out under the rooftops of more than 80.5 million homes across the country.

Artfully exploring insecurities, societal pressures, and just plain teenage goofiness, Scott and Borgman contrast the experiences of being an adolescent and being the parent of one. Sixteen-year-old Jeremy Duncan is learning to navigate residential byways and high school hallways while the parentals, a.k.a. Connie and Walt Duncan, just try to keep pace and find a little peace.
Jerry Scott is the co-creator of the award-winning comic strip Zits. He lives in central coastal California. Jerry's work on Baby Blues has delighted fans and wowed the cartooning world since he launched the strip with Rick Kirkman in 1990.