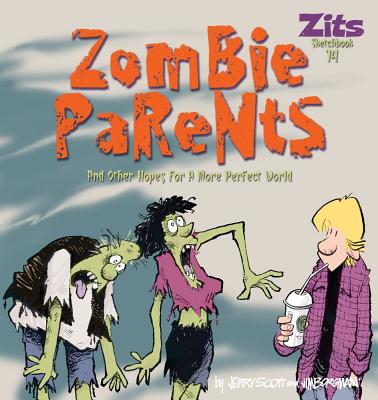 This is book number 28 in the Zits series.

In their immensely popular comic strip Zits, Pulitzer Prize-winning artist Jim Borgman and writer Jerry Scott have succeeded in creating one of the most poignant, realistic and funny portrayals of teenagers found in any medium today.

Lauded by The Los Angeles Times "as one of the freshest and most imaginative strips," and designated as Best Newspaper Comic Strip twice by the National Cartoonists Society, Jerry Scott and Jim Borgman's Zits offers shared experience and parenting salvation for the 80.5 million homes to both teen and parent in the United States.

Simultaneously, Zits artfully reminds readers what it's like to both be an adolescent and parent an adolescent. While fifteen-year-old son Jeremy is grappling with impending career choices and parental pearls of wisdom on topics ranging from driving to sex, parents Connie and Walt do their best to keep up with his latest trends, vocabulary words, and appetite cravings.

Compellingly presenting a full spectrum of teen and parent goings-on, Zits appears in more than 1,600 newspapers worldwide is read daily by more than 45 million fans.
Jerry Scott is the co-creator of the award-winning comic strip Zits. He lives in central coastal California. Jerry's work on Baby Blues has delighted fans and wowed the cartooning world since he launched the strip with Rick Kirkman in 1990.