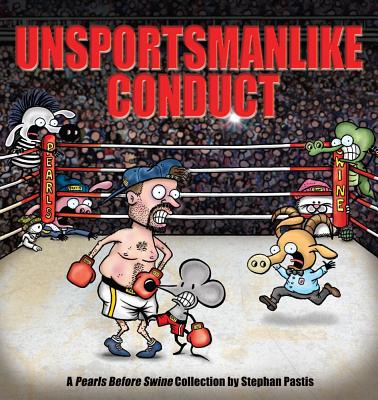 This is book number 19 in the Pearls Before Swine series.

Enjoy the wit and outlandish puns in the world of Pearls Before Swine!  Arrogant Rat is still the center of the world, Pig is forever sweet and dumb, intellectual Goat is above it all, and Zebra writes his hopeful letters to the lions and crocs that would eat him. Often dark, always funny, Pearls Before Swine  is a worldwide phenomenon!

Smart, sharp, and sometimes painfully honest, Pearls Before Swine mocks the flaws and shortcomings of human nature with cynical humor.

Pearls Before Swine is the hilarious comic strip tale of two friends: arrogant, egotistical Rat who thinks he knows it all and slow-witted Pig who is painfully naive. Together with Zebra, the activist, Goat, the reluctant brain,  and the carnivorous Crocs, it offers pointed commentary on humanity’s pitiable plight.
Stephan Pastis is an attorney turned cartoonist. A graduate of the University of California, Berkeley, and the UCLA School of Law, he worked as a lawyer before trying his hand at cartooning. Pastis lives in the Bay Area with his wife and two children.
"Unsportsmanlike Conduct may be the 14th collection of a comic strip just now hitting its teenage years but remains, remarkably, one showing no signs of growing pains." (Sgt. Spiffy, Popzara)