Meer is altijd beter: A comedy for students of Dutch (Paperback) 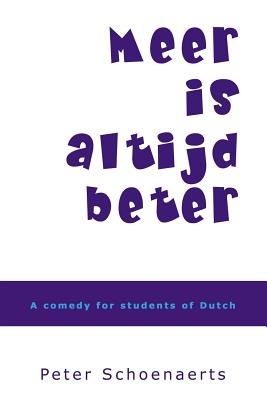 Meer is altijd beter: A comedy for students of Dutch (Paperback)


Not On Our Shelves—Ships in 1-5 Days
(This book cannot be returned.)
Paolo Sanseverino is an Italian exchange student in Belgium. His Flemish friends Peter en Els are going to get married in three weeks. Right now, he is expecting an Italian visitor to arrive. Paolo is looking forward to it all There is only one problem: Jennifer Armstrong, an eccentric American woman, is around... This play was written for foreign students of Dutch. It contains about 1000 frequently used Dutch words. The language is simple and the world that is being created is full of funny situations and clich's about the Low Countries.
Peter Schoenaerts studied Literature and Linguistics (Dutch and English) at the University of Louvain and trained as an actor at the American Academy of Dramatic Arts in New York. He co-authored several language manuals and other publications (a.o. Vanzelfsprekend, Niet Vanzelfsprekend, Go Dutch!, Thematische Woordenschat Nederlands voor Anderstaligen, Het Grote Puzzel- en Doeboek voor Anderstaligen). From 2005 till the end of 2008 he taught Dutch at one of the largest Dutch Language and Culture schools: 't Klokhuis (in New Jersey and New York). He currently works for the Taaluniecentrum Dutch as a Foreign Language in Brussels. He is also an actor and director.