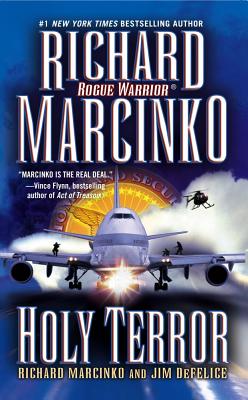 
Not On Our Shelves—Ships in 1-5 Days
From the #1 New York Times bestselling author Vince Flynn calls “the real deal,” Richard Marcinko delivers a Rogue Warrior thriller that finds Demo Dick darkening the aisles of St. Peter’s Basilica in Vatican City—tracking a group of terrorists who want to turn the world’s largest Catholic church into the world’s biggest Roman candle.

Nothing and no one is sacred when the Rogue Warrior smokes out a terrorist network with plans to turn the Vatican to ash. In Holy Terror, the former SEAL commander fires his first shots at a NATO conference in Rome, where he caps off his blistering anti-terror speech with a helpful visual aid—eliminating a "waiter" and playing volleyball with a live grenade.

"Marcinko is the real deal." -- Vince Flynn, bestselling author of Act of Treason