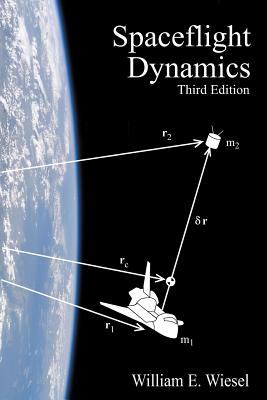 
Not On Our Shelves—Ships in 1-5 Days
(This book cannot be returned.)
Spaceflight Dynamics is an introduction to the dynamics of spaceflight: orbits, maneuvers, satellite stability and control, rocket performance, reentry. It is suitable for upper undergraduate and introductory graduate courses in astronautical engineering or physics.
Dr. William E. Wiesel is a professor of astronautical engineering at the Air Force Institute of Technology, Wright-Patterson AFB, Ohio, a position he has held since 1988. He as been on the faculty of that institution since 1977. Dr. Wiesel received his B.S. degree in astronomy from the University of Massachusetts in 1970, and his Ph.D. in stronomy from Harvard University in 1974. His early experience included tracking satellites with what is now Space Command in the U.S. Air Force, and software development for satellite tracking. He has published numerous technical papers in solar system astronomy, optimal orbit transfer, control of periodic systems, and dynamical systems theory. His current interests center about applying dynamical systems theory to orbital mechanics.