Good Talk, Dad: The Birds and the Bees...and Other Conversations We Forgot to Have (Large Print / Hardcover) 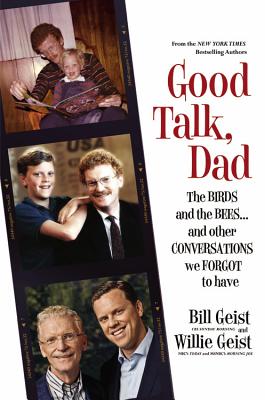 Good Talk, Dad: The Birds and the Bees...and Other Conversations We Forgot to Have (Large Print / Hardcover)


Not On Our Shelves—Ships in 1-5 Days
Bill Geist--the beloved, award-winning, long-time special correspondent for "CBS: Sunday Morning," whose debut Little League Confidential was a New York Times bestseller in hardcover and paper--and Willie Geist, the Today Show host, popular member of MSNBC's "Morning Joe," and author of the best-selling American Freak Show--have begun an extended conversation between father and son on areas of mutual interest, agreement, and disagreement.

Told in a unique back-and-forth banter style, the hilarious father-son team will laugh together at the shared journey of their relationship. They'll riff on fatherhood, religion, music, sports, summer camp disasters, driving lessons gone horribly wrong, being on TV, and their wonderfully odd family life. Think Big Russ and Me meets S*** My Dad Says, with humorous observations about professional wrestling as a worldview, raising a kid with television cameras in the kitchen, and anything and everything else that comes to their witty minds.

The Geists decided to write this book so their children and grandchildren would have a record of their unusual father-son relationship. The book is remarkably funny, as well as poignant and sincere, especially in light of Bill's announcement that he's been diagnosed with Parkinson's. With its lighthearted look at the crazy things fathers and sons go through and the unique bond those experiences forge, the book is sure to be a must-have gift for Father's Day.
Bill Geist is the New York Times bestselling author of nine books, including City Slickers, Little League Confidential, The Big Five-Oh, Fore! Play!, and Way Off the Road. Geist has won numerous Emmys and in 2011 was awarded a star on the Hollywood Walk of Fame for the hundreds of "singular, informative, entertaining" pieces he has done since joining CBS in 1987. He was awarded the Bronze Star for his service as a combat photographer in Vietnam in 1969. In 2018 he retired from CBS having battled Parkinson's disease for twenty-five years. Geist lives in Riverside, Connecticut, with his wife, Jody. They have two children, Willie and Libby, and four grandchildren.
"[D]elightful... it is lovely, loving and a must read."—Star-Ledger

"I loved this book. It's no surprise the Geists have such broad appeal. I want them to be my dad and brother."—Jim Gaffigan, author of New York Times bestseller Dad Is Fat

"Bill and Willie are the wittiest duo I know. Their stories are hilarious. Reading this book made me feel like I grew up a Geist!"—Andy Cohen, host of Bravo's Watch What Happens: Live and author of New York Times bestseller Most Talkative