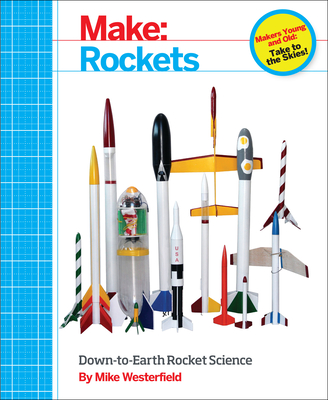 This book teaches the reader to build rockets--powered by compressed air, water, and solid propellant--with the maximum possible fun, safety, and educational experience.

Make: Rockets is for all the science geeks who look at the moon and try to figure out where Neil Armstrong walked, watch in awe as rockets lift off, and want to fly their own model rockets. Starting with the basics of rocket propulsion, readers will start out making rockets made from stuff lying around the house, and then move on up to air-, water-, and solid propellant-powered rockets. Most of the rockets in the book can be built from parts in the Estes Designer Special kit.

Mike started programming on a PDP-8 using a teletype terminal. As the personal computer revolution got going he sold his car and rode a bike for several months to raise cash to buy an Apple II computer. He wanted to write a chess program but couldn't find a good assembler, so he took a summer off to write his own. Two years later he finished ORCA/M, which went on to become Apple Programmer's Workshop, the Apple-labeled development environment for the Apple IIGS.Born the same year as Steve Jobs and Bill Gates, Mike made the mistake of getting an education instead of getting rich. A slow learner, he graduated from the U.S. Air Force Academy in 1977 with a degree in Physics, earned an M.S. in Physics from the University of Denver, and was Working on a Ph.D. when he started making more money from his sideline software company than from the Air Force.Since then Mike has developed numerous compilers and interpreters, software for mission-critical physics packages for military satellites, plasma physics simulations for Z-pinch experiments, multimedia authoring tools for grade schoolers, disease surveillance programs credited with saving lives of hurricane Katrina refugees, advanced military simulations that protect our nation's most critical assets, and technical computing software for iOS.Mike currently runs the Byte Works, an independent software publishing and consulting firm. He is a PADI scuba instructor who lives in Albuquerque with his wife and cat, enjoying being an empty nester and spoiling his grandchildren.