Military History: The Definitive Visual Guide to the Objects of Warfare (Paperback) 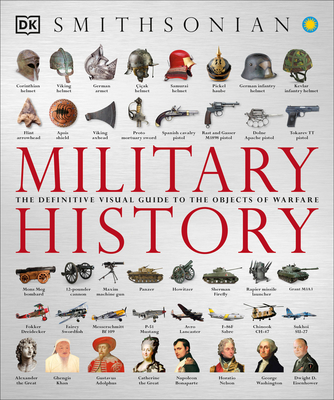 Military History: The Definitive Visual Guide to the Objects of Warfare (Paperback)


Not On Our Shelves—Ships in 1-5 Days
A compelling visual guide to the history of the military!

Travel through time and explore 5,000 years of weaponry in stunning detail with this riveting military book — from the spears and swords of ancient times to the guns and grenades of modern warfare.

• It includes objects taken from collections that are not available to the public or have never been photographed before
• Features comprehensive catalogs of the key weapons, armor, equipment and military technologies of each period, along with full specification details and information about special features
• Includes stunning close-up “virtual tours” on subjects as diverse as a Roman fort, a medieval castle, a WWI trench system, a WWII tank and a modern aircraft carrier, to name a few
• Narrative spreads and timelines provide historical context for the emerging use of, or key shifts in, certain technologies, explaining their impact on troops, tactics and fortifications

The Military History Book profiles key arms and armaments and conveys technologies and tactics across hundreds of pages of dramatic photography and accessible text. Find out how war is waged between battleships at sea, tanks on the battlefield and fighter planes in the skies. Climb siege towers, drive chariots, enter medieval fortresses, fly unmanned drones and detect stealth bombers.

You will also experience virtual tours of iconic vehicles, including the T-34 tank, the F-117 Nighthawk stealth bomber and the AH-64 Apache helicopter. Uncover military history from iconic battles, leaders and weapons of war that changed the course of history and shaped our modern world.

This engrossing visual account of military history builds on the bestselling, international success of Weapon, Battle, Soldier and War, and is an essential purchase for all military enthusiasts or anyone intrigued by the history of military warfare and weaponry.
DK was founded in London in 1974 and is now the world's leading illustrated reference publisher and part of Penguin Random House, formed on July 1, 2013. DK publishes highly visual, photographic nonfiction for adults and children. DK produces content for consumers in over 87 countries and in 62 languages, with offices in Delhi, London, Melbourne, Munich, New York, and Toronto. DK's aim is to inform, enrich, and entertain readers of all ages, and everything DK publishes, whether print or digital, embodies the unique DK design approach. DK brings unrivalled clarity to a wide range of topics with a unique combination of words and pictures, put together to spectacular effect. We have a reputation for innovation in design for both print and digital products.   Our adult range spans travel, including the award-winning DK Eyewitness Travel Guides, history, science, nature, sport, gardening, cookery, and parenting. DK’s extensive children’s list showcases a fantastic store of information for children, toddlers, and babies. DK covers everything from animals and the human body, to homework help and craft activities, together with an impressive list of licensing titles, including the bestselling LEGO® books. DK acts as the parent company for Alpha Books, publisher of the Idiot's Guides series and Prima Games, video gaming publishers, as well as the award-winning travel publisher, Rough Guides.
Praise for the hardcover:

"The next best thing to going to a museum to see these items for yourself." – Armchair General Magazine