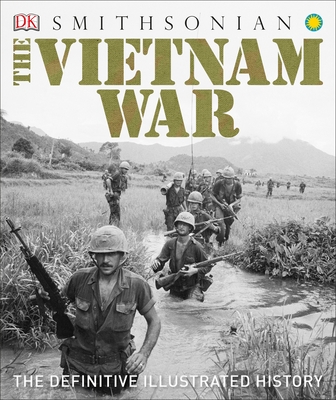 By DK, Smithsonian Institution (Contributions by)

The Vietnam War remains one of the most heroic and heartbreaking events in history. This definitive guide charts the unforgettable story of the world’s first televised war.

Created in association with the Smithsonian Institution, this authoritative guide chronicles America's fight against Communism in southeast Asia during the 1960s and 1970s, and comprehensively explores the people, politics, events, and lasting effects of the Vietnam War.

Hundreds of insightful images and a compelling narrative combine to chronicle this catastrophic conflict.   From 1955, the communist government of North Vietnam waged war against South Vietnam and its main ally, the USA. Over the course of two decades of hostility and warfare, the number of casualties reached an incomprehensible three million people.

Detailed descriptions of every episode, including Operation Passage to Freedom and the evacuation of the American embassy in Saigon, tell the stories in iconic photographs and eyewitness accounts. Discover the real people behind the conflict, with gripping biographies of key figures, including Henry Kissinger, General Thieu, President Nixon, and Pol Pot. This incredible visual record is supported by locator maps, at-a-glance timelines, archive photography, and key quotations to ensure an all-encompassing experience.

The Vietnam War is an essential historic reference to help humanity learn the lessons of suffering and sacrifice from one of the bloodiest conflicts of the 20th century.

DK was founded in London in 1974 and is now the world's leading illustrated reference publisher and part of Penguin Random House, formed on July 1, 2013. DK publishes highly visual, photographic nonfiction for adults and children. DK produces content for consumers in over 87 countries and in 62 languages, with offices in Delhi, London, Melbourne, Munich, New York, and Toronto. DK's aim is to inform, enrich, and entertain readers of all ages, and everything DK publishes, whether print or digital, embodies the unique DK design approach. DK brings unrivalled clarity to a wide range of topics with a unique combination of words and pictures, put together to spectacular effect. We have a reputation for innovation in design for both print and digital products.   Our adult range spans travel, including the award-winning DK Eyewitness Travel Guides, history, science, nature, sport, gardening, cookery, and parenting. DK’s extensive children’s list showcases a fantastic store of information for children, toddlers, and babies. DK covers everything from animals and the human body, to homework help and craft activities, together with an impressive list of licensing titles, including the bestselling LEGO® books. DK acts as the parent company for Alpha Books, publisher of the Idiot's Guides series and Prima Games, video gaming publishers, as well as the award-winning travel publisher, Rough Guides.