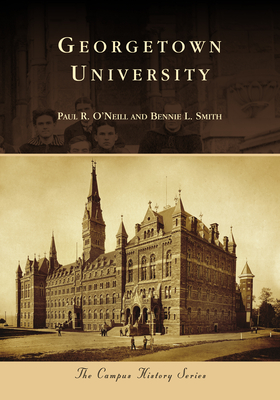 
Not On Our Shelves—Ships in 1-5 Days
This Book, Georgetown University, is a revised edition by alumni Paul ONeill (C'86) and Bennie Smith (C'86). The book includes 200 images from Georgetown University's archives along with captions that tell the story of the university's first 200 years. Georgetown University, the oldest Catholic university in America, was founded in 1789 by Archbishop John Carroll, SJ, as an academy for boys that was open to Students of Every Religious Profession and every Class of Citizens. Carroll established the school on a hilltop overlooking the Potomac River, delightfully situated as Charles Dickens would observe several decades later. Georgetown welcomed its first student, William Gaston, in 1791 and was chartered by Congress in 1815, but by the time of the Civil War, when Federal troops occupied the campus, the school was on the brink of collapse. It was not until the presidency of Patrick F. Healy, SJ, in 1873 that Georgetown would recover and be set on a course to become a university, linking Georgetown College with professional schools of medicine and law. The early 20th century was marked by the founding of the schools of dentistry, nursing, foreign service, languages and linguistics, and business. Now among the top universities in America, Georgetown is continuously reinvigorated by teaching and scholarship dedicated to serving the nation and the world.