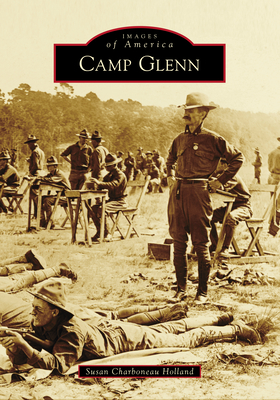 
Not On Our Shelves—Ships in 1-5 Days
In 1906, the North Carolina state legislature established Camp Glenn as the permanent summer training camp for the North Carolina National Guard. The camp's chosen site, located three miles west of Morehead City, was ideally situated on a sandy stretch of firm, high, and well-drained land overlooking Bogue Sound. A large parade ground adjoined the camp, and it was level as a floor and could accommodate the entire North Carolina National Guard. Although it was first established as a target practice field, in later years, the camp became the first US Coast Guard air station and later a US Navy base. Camp Glenn was the mobilization site for National Guard troops sent to the Mexican border during the 1916 Punitive Expedition against Pancho Villa led by Gen. John J. Black Jack Pershing. Citizen soldiers who trained at Camp Glenn also fought in World Wars I and II protecting North Carolina's coastline and battling for the United States in Europe.