Three Plays by Edward Albee: The Death of Bessie Smith, The Sandbox, The American Dream (Paperback) 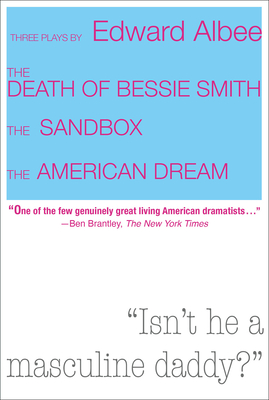 Three Plays by Edward Albee: The Death of Bessie Smith, The Sandbox, The American Dream (Paperback)


Special Order—Subject to Availability
This new collection features three acclaimed one-act plays from Edward Albee's early years. With the initial productions of The Death of Bessie Smith, The Sandbox, and The American Dream, Albee consolidated his reputation as a brilliant new talent of the New York theater scene.

These three plays tackle major themes such as race relations, American family life, and the essence of theater itself -- each of which still continue to resonate. Representing the bold and exciting periods in the then young career of widely considered America's most popular and imaginative playwrights, this edition is a must-have for theater lovers.
Edward Albee's plays include "The Zoo Story" (1958), "The American Dream" (1960), "Who's Afraid of Virginia Woolf?" (1961 62, Tony Award), "Tiny Alice" (1964), "A Delicate Balance" (1966, Pulitzer Prize, and Tony Award, 1996, also available from Overlook), "Seascape" (1974, Pulitzer Prize, also available from Overlook), "Three Tall Women" (1994, Pulitzer Prize), and "The Play About the Baby" (2001, also available from Overlook). He was awarded the Gold Medal in Drama from the American Academy and Institute of Arts and Letters in 1980, and in 1996 he received both the Kennedy Center Honors and the National Medal of Arts."