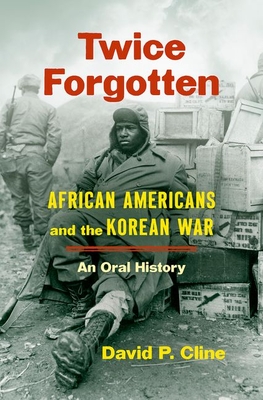 
In Stock—Click for Locations
Journalists began to call the Korean War the Forgotten War even before it ended. Without a doubt, the most neglected story of this already neglected war is that of African Americans who served just two years after Harry S. Truman ordered the desegregation of the military. Twice Forgotten draws on oral histories of Black Korean War veterans to recover the story of their contributions to the fight, the reality that the military&8239;desegregated in fits and starts, and how veterans' service fits into the long history of the Black freedom struggle.

This collection of seventy oral histories, drawn from across the country, features interviews conducted by the author and his colleagues for their American Radio Works documentary, Korea: The Unfinished War, which examines the conflict as experienced by the approximately 600,000 Black men and women who served. It also includes narratives from other sources, including the Library of Congress's visionary Veterans History Project. In their own voices, soldiers and sailors and flyers tell the story of what it meant, how it felt, and what it cost them to fight for the freedom abroad that was too often denied them at home.