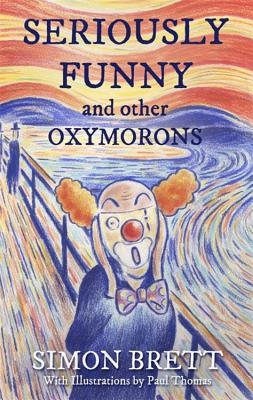 'Delightful. This dip-in-anywhere book put a smile on my face from the first page . . . for everyone who likes a good chuckle'
Ruth Milligan

As we all know, the oxymoron is one of the great beauties of the English language. It has been defined as 'a figure of speech that juxtaposes elements that appear to be contradictory'. Famous examples would include 'bitter-sweet', 'open secret' and 'compassionate Conservatism'.

Seriously Funny, and Other Oxymorons brings together a great many examples of the oxymoron genre, amusingly illustrated by Paul Thomas.

The book is arranged according to various categories ranging from Popular Culture to Political Principles and Business Ethics, all covered in Simon Brett's inimitably witty style.

Anyone with an 'unbiased opinion' will quickly grasp that Seriously Funny makes a 'devilishly nice' book.

SIMON BRETT is the author of over ninety books, many of them crime novels. His humorous writing includes the internation bestsellers How To Be A Little Sod and Summersdale's very successful Baby Tips series. He was educated at Dulwich College and Wadham College, Oxford, where he gained a First Class Honours Degree in English. A former radio and television producer, he has to date written over ninety books. A great many are crime novels, including the Charles Paris, Mrs Pargeter and Fethering series. Simon was Chairman of the Crime Writers Association from 1986 to 1987 and of the Society of Authors from 1995 to 1997. He is President of the Detection Club and was awarded the 2014 CWA Diamond Dagger. He lives near Arundel in West Sussex and is married with three grown-up children, three grandsons, one granddaughter, and a cat called Polly.