The Last Sanctuary in Aleppo: A remarkable true story of courage, hope and survival (Paperback) 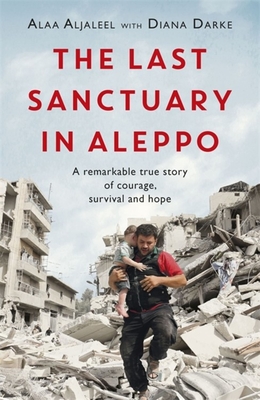 The Last Sanctuary in Aleppo: A remarkable true story of courage, hope and survival (Paperback)

By Alaa Aljaleel, Diana Darke (With)

From Diana Darke, the acclaimed author of My House in Damascus and The Merchant of Syria, comes the extraordinary true story of a heroic ambulance driver who created a cat sanctuary in the midst of war-torn Aleppo.

"I'll stay with them no matter what happens. Someone who has mercy in his heart for humans has mercy for every living thing."

When war came to Alaa Aljaleel's hometown, he made a remarkable decision to stay behind, caring for the people and animals caught in the crossfire. While thousands were forced to flee, Alaa spent his days carrying out perilous rescue missions in his makeshift ambulance and building a sanctuary for the city's abandoned cats.

In turn, he created something unique: a place of tranquility for children living through the bombardment and a glimmer of hope for those watching in horror around the world. As word of Alaa's courage and dedication spread, the kindness of strangers enabled him to feed thousands of local families and save hundreds of animals. But with the city under siege, time was running out for the last sanctuary in Aleppo and Alaa was about to face his biggest challenge yet...

This is the first memoir about the war in Syria from a civilian who remains there to this day, providing both a shocking insider account as well as an inspiring tale about how one person's actions can make a difference against all odds.

Alaa Aljaleel (Author)
Alaa Aljaleel is an electrician turned ambulance driver from Aleppo. Since the Syrian civil war broke out, he has been working tirelessly to save the lives of both people and animals, and is the founder of Ernesto's House, a sanctuary for abandoned animals in Aleppo.

Diana Darke (Author)
Diana Darke is a journalist, travel writer, and expert on the Middle East, and author of My House in Damascus and The Merchant of Syria. After studying Arabic at Oxford University, Diana Darke worked for the British government and GCHQ, and lived in Syria, Egypt and with a Bedouin tribe. She is married with two children, both born in Cairo.

The Last Sanctuary in Aleppo is a gentle, easy read... awe-inspiring and heart-­warming... The tragic stories are leavened in part by Aljaleel's gentle sense of humour.—The National (AE)

The cat man of Aleppo, Mohammad Aljaleel, touched the hearts of millions—BBC News