My Family and the Galapagos (Paperback) 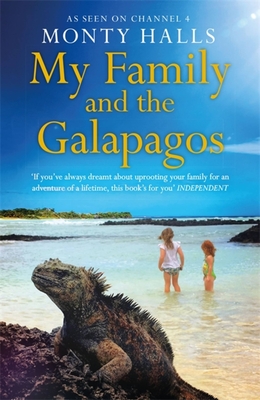 My Family and the Galapagos (Paperback)

The Galapagos Islands have captured hearts and captivated imaginations for centuries. Such is their ecological importance that in 1978 the archipelago was declared the first ever World Heritage Site, a testament to our collective desire to preserve the magic and diversity that inspired Darwin. Monty Halls first visited the islands almost twenty years ago and his immediate fascination with their wild beauty would go on to shape the rest of his life.

As an explorer, marine biologist, ex-Royal Marine and now President of the Galapagos Conservation Trust, Monty is a passionate advocate for those fighting to save the Galapagos. In 2017, he and his dedicated research team - his wife, Tam, and their two young daughters, Molly and Isla - moved to Santa Cruz to experience just what life is like in the world's most spectacular tourist destination. As weeks turned into months, the Halls family were in turn spellbound by the beauty of the islands and heartbroken by the devastation that humans are inflicting upon them. One stint there was never going to be enough, and just two years later they found themselves heading back, this time staying on one of the remotest and most challenging islands, diving into the culture of the Galapagos and the desperately needed conservation work taking place there.

Written with warmth, humour, and authority, My Family and the Galapagos follows Monty and his family as they navigate life on the most important archipelago on the planet and strive to preserve it for generations to come.

Monty Halls is a writer, broadcaster, speaker, naturalist, former Royal Marine, marine biologist and the President of the Galapagos Conservation Trust. He worked for Nelson Mandela during the peace process in the early nineties, and then left the Marines to pursue a career in expeditions, travel journalism and biology. His experience covers two decades of leading teams in some of the most remote environments on earth and presenting numerous wildlife documentaries. He is the presenter of the Channel 4 documentary, My Family and the Galapagos, where he embarks on the mission to save the Galapagos alongside his wife, and two daughters.
Halls blends Bill Bryson-esque contextual anecdotes with a genuine earnestness for the subject matter in a manner that is seldom less than endearing.—How It Works Magazine

If you've always dreamt about uprooting your family for an adventure of a lifetime, this book's for you.—The Independent