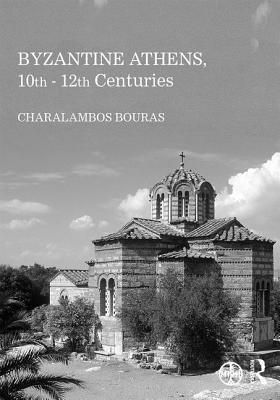 In this masterful synthesis, Charalambos Bouras draws together material and textual evidence for Athens in the Middle Byzantine period, from the mid-tenth century to 1204, when it was conquered by Crusaders. What emerges from his meticulous investigation is an urban fabric surprisingly makeshift in its domestic sector yet exuberantly creative in its ecclesiastical architecture. Rather than viewing the city as a mere shadow of its ancient past, Bouras demonstrates how Athens remained an important city of the Byzantine Empire as the seat of a metropolitan, home to local aristocracy, and pilgrimage destination for those who came to worship at the Christian Parthenon. Byzantine Athens explores the relationship of the Byzantine infrastructure to earlier configurations, shedding light on the water supply, industrial facilities, streets and fortifications of medieval Athens, and exploring the evidence for the form and typology of Byzantine houses. Thanks to Bouras's indefatigable study of all available archaeological reports the first part of the book offers an overall picture of the Middle Byzantine city. The second part presents a fully documented and illustrated catalogue of nearly 40 churches, including synthetic treatments of their typology and morphology set in the wider Byzantine architectural context. Finally, Bouras joins his unrivalled knowledge of the surviving remains and exhaustive scrutiny of the relevant scholarship to offer a historical interpretation of the Athenian monuments. Byzantine Athens is a unique achievement that will remain an invaluable compendium of our knowledge of one of the most complex, yet relatively unknown, Byzantine cities.

Professor Charalambos Bouras (1933-2016) was a scholar of international recognition who taught History of Architecture in the Universities of Thessaloniki and Athens for 35 years. In addition to his ground breaking research as a specialist in Byzantine and Post-Byzantine architecture, he also made significant contributions to the understanding of ancient architecture. He was the President of the Committee for the Restoration of the Acropolis Monuments, and a member and vice-president of the Board of Trustees of the Benaki Museum, Athens. He passed away in July 2016 during the final preparation of this English edition of Byzantine Athens.