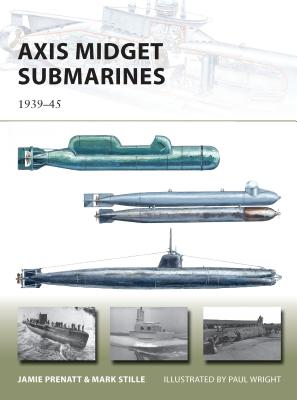 This is book number 212 in the New Vanguard series.

Axis Midget Submarines details the history, weapons, and operations of German, Japanese, and Italian midget submarines during World War II. Over this period, Germany, Japan, and Italy built approximately 2,000 small, inherently stealthy, naval craft to perform special operations and conventional navy missions. Much more numerous and more technically advanced than their Allied counterparts, they saw service worldwide, operating in the Pacific, Mediterranean, Black Sea, Indian Ocean, North Sea, and the English Channel. Manned by courageous crews, these vessels made daring attacks on Allied ships in heavily protected anchorages using torpedoes and mines. Most notable were attacks against Gibraltar - launched from an Italian cargo vessel interred in nearby neutral Spain that had been converted into a clandestine support base and equipped with an underwater hatch - and Pearl Harbor. They were used against shipping in coastal waters and, near the end of the war, in desperate attempts to offset their opponents' overwhelming naval superiority during the US advance across the Pacific and the Allied amphibious landings in France and Italy.

In this book, the term midget submarine includes submarines of less than 50 tons, equipped with two torpedoes and a crew of 1-4, and manned torpedoes, relatively short range torpedo-size craft with one or two operators and armed with either mines or one torpedo. It excludes vessels designed as suicide craft. It addresses operational vessels and prototypes, spanning 11 German, 4 Japanese, and 5 Italian classes. The most advanced types incorporated innovative design features and served as the basis for a number of post-war vessels. This book also briefly covers the larger vessels used to transport the midget submarines to their operational areas. Also included is an analysis of the effectiveness of these vessels, including an examination of their strengths and weaknesses. The success (or lack of success) will be discussed both in the context of the individual vessel design and as a component of their respective nation's submarine force. They are also compared to similar Allied designs.

“The authors revealed the story in a well organized and easily read text. Original artwork brings some of the great missions to life, and displays the vessels in beyond what most photographs can. The photographic choices are very interesting. Many are useful for modelers and artists. This book should be welcome to those interested in Axis special forces, naval operations, submarines and torpedoes.” —Frederick Boucher, KitMaker Network

“In this book the authors have done a superb job of covering the development and deployment of all the various types of Axis midget submarine (and there ware more than you'd think). The book has a lot of superb period photos of these craft and this is additionally enhanced by some excellent art work ...  an excellent title and one that I'm sure you will find a fascinating read.” —Scott van Aken, www.modelingmadness.com

“Axis Midget Submarines covers just what the title says, midget submarines from Italy, Germany and Japan.This is an excellent book and well illustrated with a great sense of history. I recommend it to all fans of the submarine and especially midget subs.” —Dave Morrissette, IPMS/USA Reviews