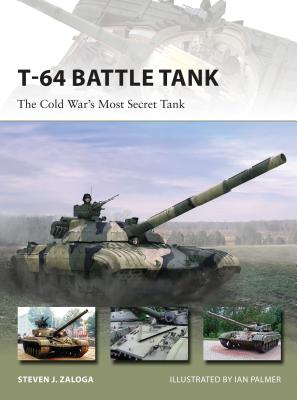 This is book number 223 in the New Vanguard series.

The T-64 tank was the most revolutionary design of the whole Cold War, designed to provide the firepower and armor protection of a heavy tank in a medium-weight design. It pioneered a host of sophisticated new technologies including laminate armor, stereoscopic tank rangefinders, opposed-piston engines, smooth-bore tank guns with discarding sabot ammunition, and gun-fired guided projectiles. These impressive features meant that the Russians were loath to part with the secrets of the design, and the T-64 was the only Soviet tank type of the Cold War that was never exported.

Written by an armor expert, this detailed technical history sheds light on the secrets behind the Cold War's most controversial tank, revealing how its highly advanced technologies proved to be both a blessing and a curse.

Ian Palmer is a highly experienced digital artist with two decades of experience in the video games industry, both as a 3D artist and an Art Director. He has a passion for military history, gaming and riding his motorbike. He lives in Warwickshire with his wife, daughter and menagerie of pets.