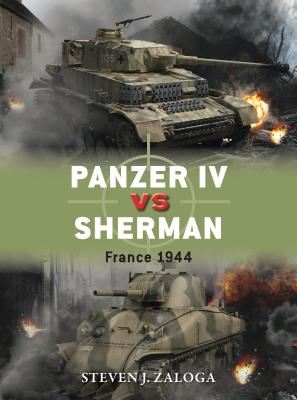 This is book number 70 in the Duel series.

As the Allies attempted to break out of Normandy, it quickly became apparent that there would be no easy victory over the Germans, and that every scrap of territory on the way to Berlin would have to be earned through hard fighting. This study concentrates on the ferocious battles between the German Panzer IV and US Sherman that were at the heart of this decisive phase of World War II. The two types were among the most-produced tanks in US and German service and were old enemies - having clashed repeatedly in the Mediterranean theater. Throughout their long service careers, both had seen a succession of technical developments and modifications, as well as an evolution in their intended roles - but both remained at the forefront of the fighting on the Western Front. Written by an expert on armoured warfare, this book invites the reader into the cramped confines of these armoured workhorses, employing vivid technical illustrations alongside archive and contemporary photography to depict the conditions for the crewmen within.
Steven J. Zaloga received his BA in History from Union College and his MA from Columbia University. He has worked as an analyst in the aerospace industry for four decades, covering missile systems and the international arms trade, and has served with the Institute for Defense Analyses, a federal think tank. He is the author of numerous books on military technology and history, including NVG 294 Allied Tanks in Normandy 1944 and NVG 283 American Guided Missiles of World War II. He currently lives in Maryland, USA.