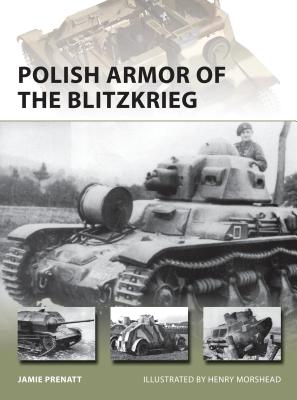 This is book number 224 in the New Vanguard series.

The Polish army during the Blitzkrieg conjures up tragic images of infantry and dashing, but ineffective and ultimately doomed cavalry charges. In actuality the Poles, in the midst of a large-scale re-armament program, had up to 600 armored vehicles available at the time of the German attack, as well as a number of newer and better designs in various stages of development. Facing the inventors of the 'Lightning War', who attacked in great numbers, on multiple fronts and with total mastery of the air, the Polish armored formations were up against it. But outdated equipment, doctrine and enormous odds did not stop these units from fighting with bravery and determination before being finally overwhelmed. This volume is a complete technical study of the machines that formed the backbone of Poland's defenses on the ground, using never-before-seen photographs and a comprehensive design and developmental history that reveal a full picture of Poland's armored forces in the context of their greatest challenge.
Jamie E. Prenatt is a senior analyst in the Department of Defense. He has over 30 years of military and civilian intelligence experience and has served in a wide range of analytic, leadership, and representational assignments. He holds an MA in Government/National Security Policy from Georgetown University and has a particular interest in weapon systems development. He has taught military history, wargaming, and historical miniature painting at the Smithsonian Institution for several years and intelligence studies at the university level.