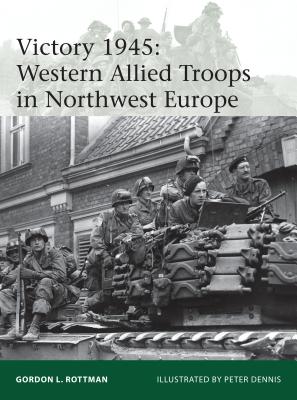 This is book number 209 in the Elite series.

Even when Western Allied troops gained a foothold in Normandy, World War II in Europe was far from over. The route to Germany's interior and the Nazis final surrender was long, arduous and blood-stained. The Wehrmacht's stubborn resistance and the shocking losses suffered by US, British, Canadian and 'Free European' troops meant that the Allies had to adapt and refine small-unit tactics, battle-drills, and their use of weapons and munitions. The troops who finally met up with the Red Army in Germany were a very different fighting force to the one that struggled up the beaches of northern France. This book offers a comprehensive guide to the late-war Allied troops, exploring their uniforms, equipment, organization and tactics. Detailed description and accurate color pictures illustrate the means by which the Allied troops on the ground evolved to the point of winning the war on the Western Front.
Gordon L. Rottman entered the US Army in 1967, volunteered for Special Forces and completed training as a weapons specialist. He served in the 5th Special Forces Group in Vietnam in 1969–70 and subsequently in airborne infantry, long-range patrol and intelligence assignments until retiring after 26 years. He was a Special Operations Forces scenario writer at the Joint Readiness Training Center for 12 years and is now a freelance writer, living in Texas.

Peter Dennis was born in 1950. Inspired by contemporary magazines such as Look and Learn he studied illustration at Liverpool Art College. Peter has since contributed to hundreds of books, predominantly on historical subjects, including many Osprey titles. A keen wargamer and modelmaker, he is based in Nottinghamshire, UK.