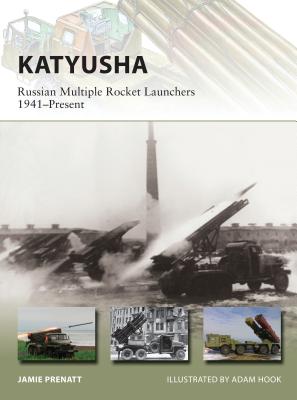 This is book number 235 in the New Vanguard series.

Although military rockets have been used since the Middle Ages, it was not until the Soviet Union pioneered the concept of Multiple Rocket Launchers (MRLs), in the late 1930s, that they emerged as a decisive weapon. In the modern era, these Soviet/Russian Katyushas have served in combat in Afghanistan, Chechnya, and Georgia.

Developed to fill the operational need for massed artillery fire support, the MRL possesses enormous destructive power and a devastating psychological impact. This New Vanguard provides a survey of Soviet and Russian Federation MRLs from the beginning of their development in 1938 to the present. It focuses on the history, design, and specifications of self-propelled ground MRL systems, but also covers towed, static, railway, and naval mounts. It highlights the many variants of the principal systems, and includes MRL unit tables of organization and equipment, information on MRL munition types, and coverage of dedicated MRL resupply vehicles.

Adam Hook studied graphic design, and began his work as an illustrator in 1983. He specializes in detailed historical reconstructions, and has illustrated Osprey titles on subjects as diverse as the Aztecs, the Ancient Greeks, Roman battle tactics, 19th-century American subjects, the modern Chinese Army, and the history of fortification. His work features in exhibitions and publications throughout the world.

"This book is a great introduction and survey of Russian MLRs. Jamie Prenatt provides an excellent read into this line of weapons and should be of interest to anyone focused on military weapons. If this is your initial entry into this series, you will be pleased." - IPMS

"Each system and its use in warfare is covered with lots of great photos and the superb art work or Adam Hook. It makes for an excellent look into this line of weapons and an interesting read to anyone with an interest in military weapons." - Modeling Madness