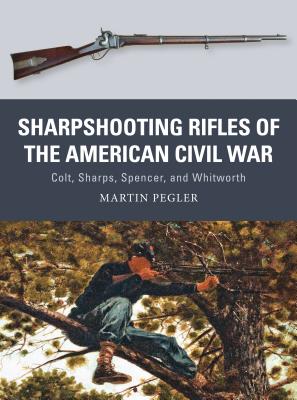 At the outset of the American Civil War, the wealthy inventor and expert shot Hiram Berdan initiated the setting-up of sharpshooting units in the Union Army; these units would be tasked primarily with open-order skirmishing, but also with long-range, accurate shooting. Initially, it was envisaged that the M1855 Colt revolving rifle would be the weapon employed by these specialists. Available in .36, .44, and .56 caliber, the M1855 swiftly earned a poor reputation, however, as it was prone to a malfunction known as “chain fire,” in which powder in all the unfired chambers would be ignited, seriously injuring the shooter.

Instead, the North's sharpshooters preferred the Sharps rifle, an innovative breech-loading weapon employing a falling-block action. It had double-set triggers, aiding accuracy, and could fire up to ten shots per minute--more than three times the rate of fire offered by the standard-issue Springfield .58-caliber rifled musket. The Sharps was very expensive, though, and military planners believed it would encourage soldiers to waste ammunition. After a prolonged fight with the Ordnance Department, however, Berdan succeeded in procuring Sharps rifles for his men. Other Union sharpshooters were equipped with the standard-issue Springfield rifled musket, the .56-56-caliber Spencer Repeating Rifle--a lever-action weapon with a seven-round tube magazine--or “target rifles,” basically sporting rifles repurposed for military use.

Conversely, the Confederacy favored the Pattern 1853 Enfield rifled musket for its sharpshooters; the South also imported from Britain quantities of the Whitworth Rifle, a .45-caliber, single-shot, muzzle-loading weapon distinguished by its use of a twisted hexagonal barrel. More prone to fouling and slower-firing than the standard-issue rifled musket, the Whitworth offered impressive long-range accuracy; its hexagonal bullets made a distinctive whistling noise in flight. In May 1864 a Confederate sharpshooter armed with the Whitworth famously killed the highest-ranking Union battle casualty of the conflict, Major General John Sedgwick, at a range of about 1,000 yards.

Featuring specially commissioned artwork, this is the engrossing story of the innovative rifles that saw combat in the hands of sharpshooters on both sides during the Civil War.

"As with the other Osprey Publishing weapons series titles I was impressed with this volume. This is a very nice reference book that contains many close-up detailed subject specific photographs and illustrations and well detailed captions. It details various sharpshooting rifles used throughout the American Civil War by both sides of the conflict." - Randy Harvey, Kit Maker Network

"Featuring specially commissioned artwork, this is the engrossing story of the innovative rifles that saw combat in the hands of sharpshooters on both sides during the Civil War." - American Gunsmith

"Pegler's grasp of each rifle's performance is impressive, as is his ability to weave these matters into a larger military and historical context. Indeed, this book will provide a welcome addition to the libraries of novice and seasoned Civil War students alike." - America's Civil War