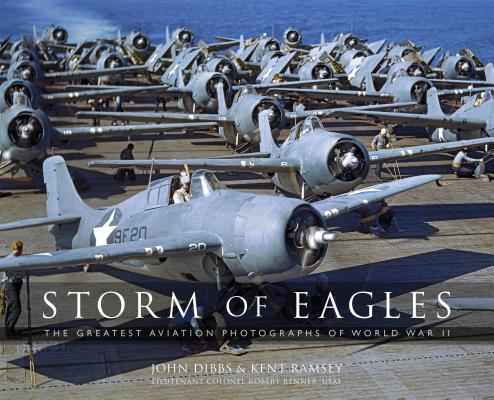 Soaring high above the fields and cities of Europe and Asia as well as the vast expanse of the Pacific, Allied and Axis pilots engaged in a deadly battle for control of the skies in World War II. Whoever won the skies would win the war.

Published in association with The National Museum of World War II Aviation, Storm of Eagles is a fully illustrated coffee-table book that brings together classic as well as never-before-seen wartime images. Compiled by one of the world's premier aviation photographers and historians, this remarkable volume is a must-have for anyone interested in World War II aviation.

John Dibbs is unquestionably the world's premier aerial photographer. John has published 17 books including the acclaimed series of Flying Legends publications. His award winning work has graced hundreds of magazine covers over the last 25 years. Raised in London, his interest in aviation was passed on by his father who grew up during the Battle of Britain near Northolt aerodrome. John now lives in Seattle, and is serving on the Board of the National Museum of World War II Aviation in Colorado Springs. His work can be viewed at ww.planepicture.com.

Kent Austin Ramsey has had a lifelong passion for World War II aviation history, and his inspiration is driven by his uncle's P-38/F-5 flight history in both the Pacific and European theatres of conflict. His uncle, Captain John G. Austin, was a photo reconnaissance pilot, and he was KIA one month before VE day. Kent has devoted the last 17 years to collecting and restoring World War II aircraft images for future generations. Kent is a native of Iowa, but he has spent the last 35 years living in the greater Seattle area.

Lieutenant Colonel Robert "Cricket" Renner (USAF, Retired), a 1988 graduate of the US Air Force Academy, flew over 3,200 hours in the F-15C Eagle during his 22-year career, including combat missions over Serbia and Iraq. He was awarded the Distinguished Flying Cross with Valor during NATO's Operation Allied Force in 1999. He has written numerous aviation articles, as well as the book Viper Force: 56th Fighter Wing--To Fly and Fight the F-16. He now flies 737s for Alaska Airlines, and warbirds with the Commemorative Air Force Alaska Wing. He lives in Alaska with his family. Lieutenant Colonel Renner wrote the text that accompanies the images in the book.

"A time machine is what John Dibbs and Kent Ramsey hoped to build when they began collecting and restoring some of the greatest images--many never before published--of World War II. Storm of Eagles...will indeed make you feel like you're standing with a U.S. Army Air Forces crew next to ace Francis "Gabby" Gabreski's P-47 Thunderbolt." - Air & Space Smithsonian

"...a magnificent visual record and a lasting tribute to those who clashed in contested skies." - Aviation History