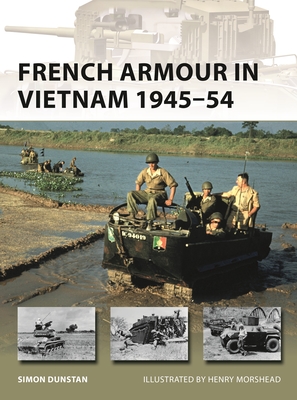 French Armour in Vietnam 1945–54 uses a variety of photos from the private collections of two French generals of the campaign, and full color plates of rarely illustrated vehicles, to tell the complete story of the tanks and armored fighting vehicles that the French employed in their colonies in Indo-China.

The French, quick to realize the efficacy of armor to preserve their sovereignty over Indo-China following the Great War, sent over their Renault FT17 tanks in 1919. Together with a variety of armored cars, these were the principal AFVs in Indo-China until World War II when the Japanese occupied the region. After the war, French troops were equipped with a motley collection of American and cast off British equipment until the outbreak of war in Korea saw an increase in military aid. This included large numbers of the M24 Chaffee Light Tank, along with amphibious vehicles such as the M29C Weasel and LVT4 Buffalo, to conduct operations in coastal and inland areas that the Viet Minh had previously thought immune to attack.