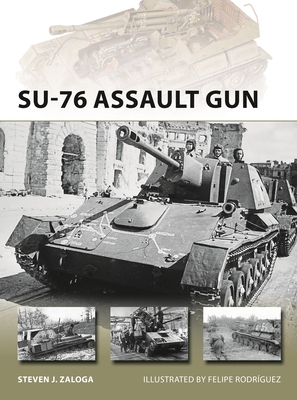 An expert history of the great Soviet armored assault gun of World War II, the SU-76.

Featuring full color artwork and written by an expert on tank warfare during World War II, this fascinating study describes one of the Soviet Union's most important armored vehicles during its struggle with Nazi Germany.

The SU-76 assault gun was the second most widely manufactured Soviet armored fighting vehicle of World War II, out-numbered only by the legendary T-34. Inspired in part by the German Marder series of tank destroyers, Soviet designers realized that the chassis of the obsolete T-70 light tank could be adapted to a much more substantial gun if it was placed in a fixed casemate rather than in a turret. This led to the design of the SU-76, which saw its combat debut at Kursk in the summer of 1943. The SU-76 was deployed primarily as an infantry direct support weapon, becoming the infantry tank of the Red Infantry, much as the StuG III became the infantry tank of the German infantry.

Steven J. Zaloga received his BA in History from Union College and his MA from Columbia University. He has worked as an analyst in the aerospace industry for over three decades, covering missile systems and the international arms trade, and has served with the Institute for Defense Analyses, a federal think tank. He is the author of numerous books on military technology and military history, with an accent on the US Army in World War II as well as Russia and the former Soviet Union. He currently lives in Maryland.