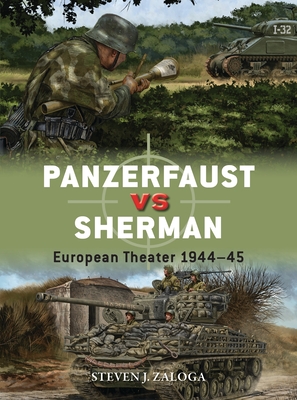 This illustrated title explores the deadly battle between the innovative Panzerfaust and Panzerschreck anti-tank weapons employed by the forces of Nazi Germany and the US tanks striving to defend against them.

In the summer of 1944, across the battlefields of Normandy, US tanks were confronted with a dangerous challenge: the mobile and deadly Panzerfaust and Panzerschreck anti-tank weapons wielded by the German infantry. Having only occasionally encountered such weaponry before, the US tankers were ill-equipped to defend against this kind of attack, and the threat only increased as the summer wore on.

This Duel title follows the technological battle for dominance that ensued, as the US Army devised new ways to defend against the threat posed by the German shaped-charge projectiles. From the addition of sandbags and spare tracks to individual tanks made by anxious crews on the ground to the large-scale programs put together by the US armies, the book explores the implementation and effectiveness of the various tactics employed by the tank crews, as well as the technology behind the anti-tank weapons wielded by their German adversaries. Drawing on first-hand accounts from the men on the ground, this illustrated title examines the evolving trial of strength between US armor and innovative German anti-tank weaponry in the climactic months of World War II in Europe.

Steven J. Zaloga received his BA in History from Union College and his MA from Columbia University. He has worked as an analyst in the aerospace industry for over three decades, covering missile systems and the international arms trade, and has served with the Institute for Defense Analyses, a federal think tank. He is the author of numerous books on military technology and military history, with an accent on the US Army in World War II as well as Russia and the former Soviet Union. He currently lives in Maryland.

"Lots of wartime black-and-white photos are complemented by color
artwork, maps and charts in this paperback. The author’s in-depth research includes first-hand accounts as he methodically analyzes the effectiveness of innovative German antitank technology and U.S. attempts to deal with it during the waning months of the war in Europe." - Toy Soldier & Model Figure

"A good handbook on the role of shaped-charge weapons, particularly useful for anyone needing a quick, accurate introduction." - New York Military Affairs Symposium